Inspired by the London 2012 Olympic and Paralympic Games, the Herefordshire Learning Disability Community Games gives people with learning disabilities the opportunity to take part in a range of sporting events.

The games were originally set up by Affinity Trust in partnership with ECHO, Herefordshire Mencap, Aspire and Wye Valley NHS Trust, who all provide support and opportunities for adults with a learning disability across Herefordshire.

Our aim was to bring the Olympic spirit to the people that we support, to encourage them to have a healthy, active lifestyle, and, most importantly, to give people the opportunity to have fun.

September 2012 saw 180 people take part in the first Community Games, opened by Jamie Dancyger – Special Olympics GB athlete with 10 gold, seven silver and four bronze medals under his belt. Other athletes, such as Olympic torchbearers Stan Cantrill and Ian Sockett, also helped out at the event. 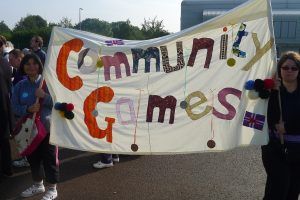 The second Community Games took place in 2014 and welcomed back both Jamie Dancyger and Ian Sockett. It was organised by Affinity Trust, ECHO, Herefordshire Mencap and 2gether. One participant said: “I liked doing boxing with Richard and Vince – it made me feel like a strong man” while another said: “The buddy bikes were brilliant. I liked going round the racecourse on one.”

In 2016, the Community Games returned for a third time. Mayor of Hereford Jim Kenyon opened the event, which was organised by Affinity Trust, ECHO, Herefordshire Mencap, Aspire, Brightstripe, and 2gether NHS Foundation Trust.

Our many thanks go to Sport Relief and the Renton Foundation, who provided the funding to make the Learning Disability Community Games a reality.

Rosemary Wooderson from Affinity Trust said: “The aim of our Community Games is to inspire adults with learning disabilities across Herefordshire to keep active. Previous Community Games provided the opportunity to try out new sports and activities in a fun, relaxed and supportive environment. Our Games have created their own lasting legacy, as we have used money raised by the events to fund further courses of popular activities.”