Carl has autism and a profound learning disability. He can become agitated in new situations. He also gets attached to certain items of clothing, and is most comfortable in jeans and T-shirt.

When Carl’s mother, Frances, announced her wedding, she asked Carl to give her away.

Carl’s support team discussed the challenges this raised and drew up a plan to help Carl on the day.

Amy, Carl’s Support Worker, went shopping with Carl and Frances for his wedding outfit. These new clothes felt strange to Carl, so the team supported him to practise wearing them at home. On some days, visitors to Carl’s house would be greeted by him wearing a t-shirt and tie, or his new shirt matched with pyjama trousers.

Over time, Carl got used to wearing the new clothes, becoming especially fond of his bright yellow tie.

Then, with Amy’s support, Carl made several advance trips to the wedding venue. This meant they could find all the facilities, work out where Carl would sit, and help him feel comfortable there. And they practised walking down the aisle at a steady pace – Carl prefers to walk fast.

Carl gradually got used to his clothes and the venue. His support team developed a ‘social story’ and talked Carl through what would happen, so he wouldn’t be surprised on the day. They showed him pictures of brides and grooms, and explained wedding traditions, such as throwing confetti.

In November, the day before the wedding, Amy took Carl’s suit to be pressed so Carl would look at his very best. And, when the day dawned, Amy supported Carl to get ready and drive to Stamford registry office.

Carl wore his newly-pressed suit proudly and walked Frances down the aisle at a measured pace before giving her away, and then watching the rest of the ceremony from the seat he now knew was his.

Frances said: “One of many best bits was when Carl had the biggest smile on his face when everyone clapped after the ceremony as he looked so happy and seemed to realise how special the day was for all of us. My heart bursts with pride every time I think back on our wedding day.”

After the ceremony, Carl joined the wedding party for the reception at the Royal Oak. He posed for photographs and sat at his place for the meal. He was happy and relaxed all day.

Jennifer, Carl’s Support Manager, said: “We were all so pleased that Carl genuinely seemed to enjoy the day as much as anyone else there. We are so glad that he was able to play a meaningful part in the ceremony, and so proud of his achievement in overcoming what was, for Carl, very real anxieties.

“To us, it shows that with time, work and patience, anyone can achieve the things they really want to do, whatever it is that holds them back.” 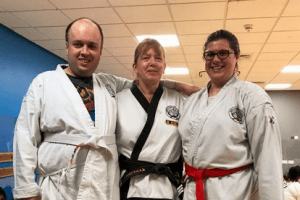 Patrick has always loved karate. So when Samantha, a member of the World Tang Soo Do Association, joined his support team, it was a perfect match. 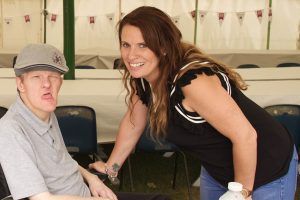 “If I could afford not to be paid, I’d still do this”

The Care Quality Commission has rated Affinity Trust’s operations in Cambridgeshire as ‘Good’, with an ‘Outstanding’ rating for their responsiveness.