Andrew, a lively young man who lives in Scotland, has been supported by Affinity Trust since 2005.  Before this, Andrew, who is on the autism spectrum, was with another care provider which unfortunately did not work for him.  This was a very difficult time for Andrew, as he found change to his routine hard to cope with and upsetting.

At first, Andrew’s move into supported living was difficult. Since it was the first time he had been in supported living, there were a lot of changes which took a while to get used to. However, Affinity Trust listened to what Andrew wanted and persisted to find the right support team for him.

Now, with support from his team, Andrew is living in his own home for the first time.  He is calm and content, and he rarely gets so upset that his behaviour becomes challenging.  He has resumed many activities he had pursued when much younger, but which he had stopped, such as swimming.  He has also gone on several holidays and now enjoys socialising with friends and going to discos, something he would have been uncomfortable with in the past.

Andrew’s mother, Margaret, feels that Affinity Trust took the time to get to know her son and work with him and that  this has made a big difference to his life. She says “Everybody’s happy – it’s all we ever wanted for Andrew.”

Find out how Affinity Trust can help you. 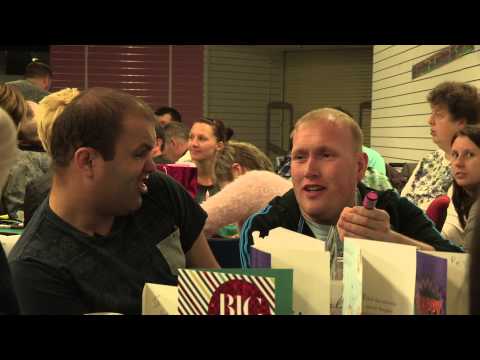 “Everybody’s happy – it’s all we ever wanted for Andrew.”

Ruth was interviewed on Leicester radio and TV